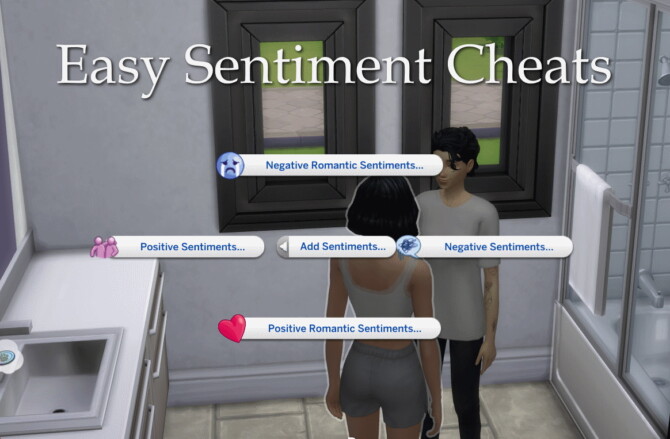 Ever get tired of how complicated and somewhat ineffective sentiment cheats are, particularly in removing sentiments? Not only do you have to type the name of both Sims—which sometimes doesn’t even work—you have to remember the tuning name for every single sentiment, which means you have to constantly look each one up. On top of that, even if you remove a sentiment by typing all of that out, it doesn’t fully remove it!

It’s a massive pain and it’s especially bad for storytelling purposes. Easy Sentiment Cheats fixes all of this. It allows players to easily assign sentiments through a pie menu which is divided into four categories, ensuring that adding a sentiment is only a few clicks away. ESC was made using only Base Game sentiments, so players without Snowy Escape can still use it! A Snowy Escape edition is planned in the future for those who would like easy cheats for those.

Instructions
Once installed, go into the game, click on a Sim, and sort through the pie menu. You’ll see a pie menu called Sentiment Cheats. In that pie menu, you can either add or remove sentiments. Every sentiment that comes with the base game is included within four pie menus: Positive Sentiments, Negative Sentiments, Positive Romantic Sentiments, and Negative Romantic Sentiments. Romantic sentiments have been sectioned off so that they aren’t added by mistake to family members and such. Pick whichever sentiment you want and your Sim will have it toward the Sim you have chosen.

On removing sentiments: frankly, they’re tedious to code. For that reason, I’ve only included sentiments that I’ve seen players complain about in this version. The reason they’re tedious is that each sentiment comes with a relationship bit. The relationship track is what affects the moodlets your Sim gets, but the bit is what affects their autonomy. For example, a Sim with the Festering Grudge sentiment toward another Sim will get tense and angry moodlets. In addition, when they interact with that Sim, they’ll autonomously do mean actions. Once the track is set to -100, the moodlets will stop appearing, but one Sim won’t stop insulting the other until the bit is gone.

For the sentiment to be truly gone, the bit must be removed, which is quite a lot of work to code for every sentiment on the backend. Currently, the sentiments that can be removed are Festering Grudge, Furious, Deeply in Love, and Deeply Connected. With time, every sentiment will be included in this mod! The immediate ones on my bucket list are Hurt, Deeply Wounded (this one bugs me to no end), Closer from Happy Memories, and Closer from Quality Time.

Caveats
There’s only one big caveat. Some sentiments simply cannot coexist. It’s well known that a Sim can only have one long-term sentiment, but they also cannot have conflicting sentiments. For example, if a Sim has Deeply in Love, it will conflict with Furious about Cheating; one will have to give way. As a general rule, positive sentiments subtract from negative ones and vice versa.

Even if they don’t outright conflict, sentiments of opposite polarity don’t like coexisting. A Sim in my daughter’s dorm has the Guilty sentiment toward her. She also has “Closer from Happy Memories”, which, when acquired, lessened the length of Guilty.

All of this is to say that if you have a Sim with negative sentiments and you add a positive one, you might need to add it three times before it fully registers. Such is the case for adding a sentiment like Deeply Connected when you have a Festering Grudge sentiment. Even if you do this, the bit will still be there, so running the cheat to remove it will be a good idea.

Also, a minor one: the menu will appear on your active Sim if you click on them. The options do nothing, but it appears. 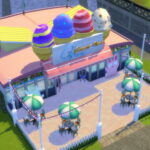 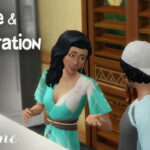 Lana CC Finds is the Latest Website that will post new Sims 4 CC with all new categorized and anyone can post their’s CC here, here you can find lost of Sims 2, Sims 3, Sims 4 CC’s Mods, Cheats, UI, CC and Lots of Things are coming soon.

Back to Top
Close